And I yet again fell off the blogging bandwagon. Sigh.

To say my Fall was crazy is a mild understatement.

The end of September I flew down to Orlando to visit good friends and run the Tower of Tower 10 miler at Disney. In 2010, I did the inaugural Wine & Dine 1/2, so I had done a night race before. Plan for Saturday was to do nothing. I laid around Katie & Steve's house, we went out for a big lunch, and I took a nap. I was feeling confident. And then the humidity hit me. I was not prepared and about 6.5 in I felt myself running out of steam quick. It hit Katie & Steve about the same time and we took to walking. I caught up with my buddy Sandy on the course, too. This was a miserable race and a PW by a long shot. While I was fortunate enough to feel ok after, many others did not. We did not stick around for the after party, and I'm glad as it was nearly 3am by the time we made it back to the house anyway.

Overall, I was not impressed with this race. I had heard great things about it's predecessor, the Tower of Terror 13K, and this did not live up to that. The course was boring. Granted, I've run boring courses before. But, I think boring in the dark vs. boring in the sunlight are two different things. There's not alot to look at in the dark to distract yourself. Disney did not live up to the on course entertainment I'd had at other races, either. And, the course got very narrow and crowded as we headed into and ran on the grounds of the sports complex.

I actually will be at Disney next year when the race is happening, but at the moment, am not planning on running it. I think night races in Florida and I just aren't meant to be.

Two weeks later was the Baltimore 1/2. This has traditionally been a strong race for me, and I was looking forward to running on a gorgeous Fall morning. Katie came up for Florida, and I started the race with her, Megan, and Kim. Sadly, due to crowding, I completely lost them a couple of miles in. I was keeping a pretty good pace and hit the hills pretty strong so just kept plugging along. After a couple of more miles I popped my iPod on (in one ear only and on low) to help distract me a bit. I did really get into the atmosphere though and quite frankly, had an absolute blast. My hometown made me proud. The crowd support and enthusiasm of people throughout the city was just awesome. And, I managed my best half time of the year!

The following weekend was the Army Ten Miler. This was my first time running it. I met up with Megan early early in the morning and we headed into the city together. She's an ATM vet, so it was great to have her show me the ropes. We hung out with ROTE friends beforehand, including our friend Rebecca who was in town from Germany. Yay! It was so good to see her. We were last together in May 2011.

My plan was to hang with Megan as long as I could. She has had amazing marathon training this fall, and was definitely more prepared than I. But, I was also still on a post-Baltimore high, so my confidence was up for a change. Our friend David started with us as well, but with MCM the following weekend, he fell back after awhile to conserve some energy for the following weekend. Megan and I got into a great groove and just kept pushing ourselves along. The 14th Street Bridge sucked as always. This was the third race I'd run it in, and it never seems to get any easier.

The atmosphere of this race was phenomenal. So many military runners and people honoring heroes. I teared up a bit when I saw a woman wearing a shirt honoring her son who had died in combat. The patriotism had some light moments, too, like the guy who played a fife and wore a tricorner hat WHILE running and got everyone pumped up. My first ATM, but definitely not my last.

That afternoon I hopped on a plane and flew to Florida to spend the week helping celebrate Katie & Steve's wedding. It was a wonderful week with special people I'm so lucky to have in my life. And, we were all brought together by running.

What I'm eating this week

I'm always leery when I find a recipe on Pinterest and others have labeled "best ever," however, I found a pad thai recipe recently that others raved about and decided to give it a try. I had seen others before, but this one was appealing due to the simplicity of the ingredients and the likelihood I'd have most on hand already. I was hoping it'd be at least comparable to what I get at my favorite local Thai place.

I did play with the recipe a bit of course. I mixed up a batch of sauce and put in a bit of chili garlic sauce for some heat. I used this as a marinade for a chicken breast that I sliced into thin strips. I let it hang out in the fridge for an hour or two while I worked on other things. Another addition I made was some sesame peanut tofu I came across while exploring my new, local Wegman's. (The stuff I order locally generally comes with both meat and tofu in it.)

The downside to this recipe was the amount of dishes involved. Cooking went fast, so everything had to be prepped and waiting it's turn. Thank goodness for dishwashers!

Cooking notes:
- I didn't measure the lime juice. I just squeezed a whole lime using my citrus press.
- Since I added extra ingredients, I did have to switch things up a bit in the cooking sequence. I dumped the chicken and it's marinade into the pan after removing the mostly scrambled eggs. After about 3 minutes of cooking/simmering I added in the noodles and an additional batch of sauce. I also tossed in the chopped up tofu here so it could warm through.
- My noodles took far longer than a minute to get soft. Maybe I didn't soak them long enough?
- I should have waited to add the green parts of the scallions. Since the noodles took longer to cook, they became very dark and wilted.
- I really really liked it with the double sauce. 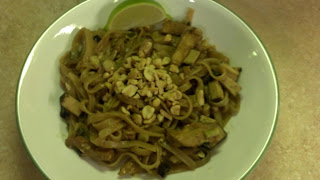 Not as pretty a picture, but wow was this good!!!

Another great recipe I made recently was Skinnytaste's Baked Chicken Parmesan. This is a pretty straightforward recipe, so I didn't really make any changes to do. I haven't been able to find any whole wheat breadcrumbs so I used some Italian style Panko bread crumbs. This really gave the chicken a great crunch!

Jen
Back of the pack runner exploring the road one step at a time.